We have it all!

Our 36th Season has all the Laughter, Music, Romance, Intrigue, Surprise, Mystery, Stories and Unforgettable Characters that have made The Playhouse the Entertainment Choice of thousands. New hilarious comedies and sensational live concerts- all performed by the finest talent in the country at our uniquely converted toothbrush factory where everyone’s close to the action.

Download our 2019 Brochure & get everything you need to know about…

WHERE YOU ARE
by Kristen da Silva

THE RISE & FALL OF LUCIEN
by Marshall Button

The Playhouse and Community Living Team Up

Ever wondered why we have so many wonderful and satisfied sponsors? Here it in their own words! Download our sponsorship brochure with all the information. You’ll be glad you did! 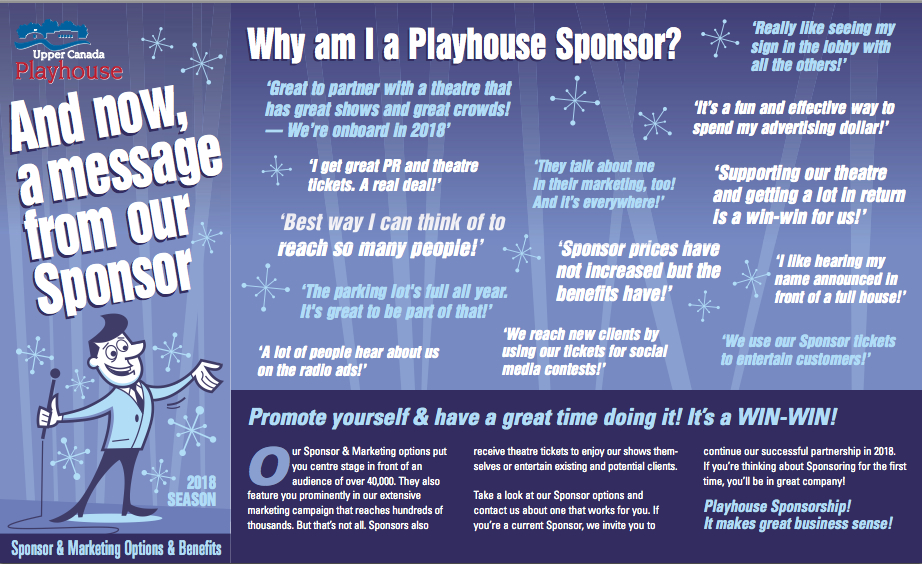 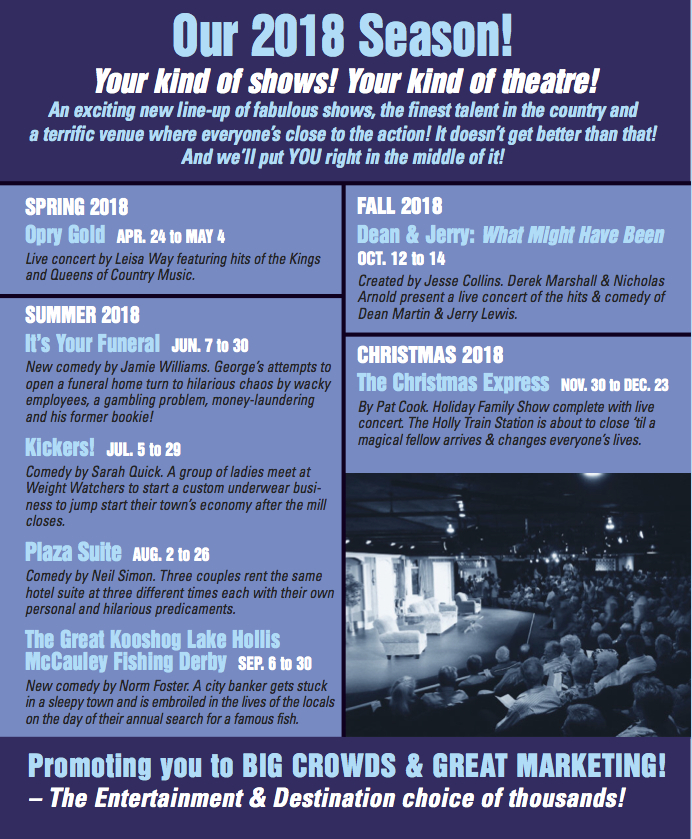 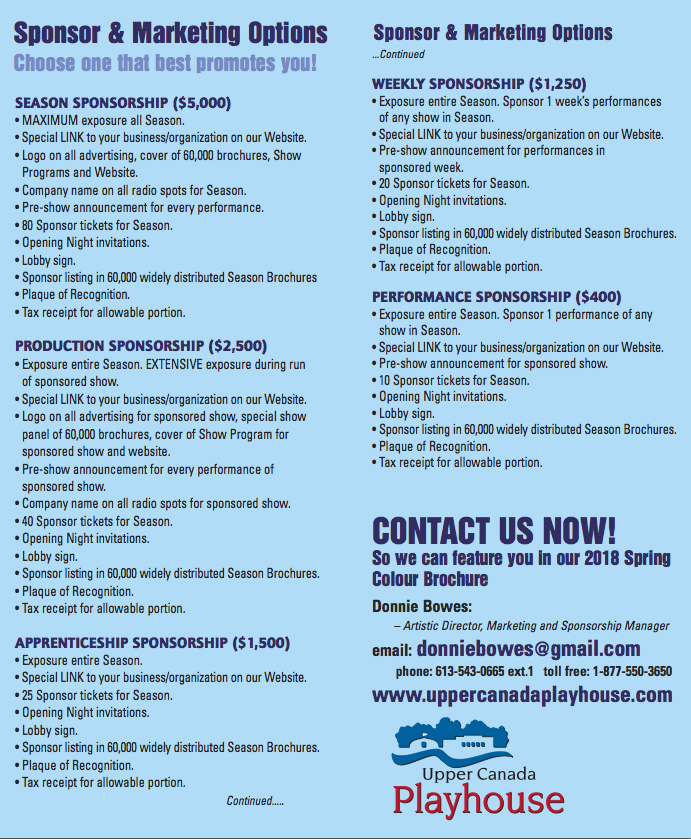 8 months of professional live theatre and concerts with something for EVERYONE and entertainment for ALL.

It’s hot off the press with all the information you need about our exciting new Season!

How Do You Want To Receive our Brochures?

Click here to download a PDF version of our 2016 Brochure! It’s hot off the press with all the information you need about our exciting new Season.

8 months of professional live theatre and concerts with something for EVERYONE and entertainment for ALL. Flex Passes on sale til June 9. Regular tickets on sale all season.

Our new Sponsorship Brochure is hot off the press – read all about the great opportunities for Sponsorship this year!

Upper Canada Playhouse recently honoured Business Manager Roseann Kelly for her 25 years of service to the theatre company. Kelly is the longest-serving employee of The Playhouse and the valuable work she has performed for a quarter century was recognized at the November 28th opening night of the theatre’s Christmas show, Have Yourself A Swinging Little Country Christmas. 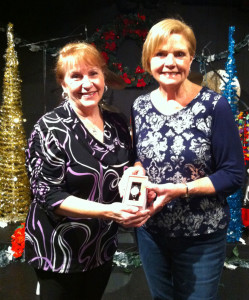 Board Secretary Joanne Notman made the presentation of an engraved watch in front of a packed house that also expressed their enthusiastic congratulations for the work she has done for the theatre. Thousands of audience members and staff have had the opportunity to know and work with Roseann over the years. Her skilled, friendly and helpful dedication to Upper Canada Playhouse has earned her the praise, thanks and recognition of this anniversary presentation.

Christmas is here for Upper Canada Playhouse in more ways than one! Their upcoming Christmas Show, HAVE YOURSELF A SWINGING LITTLE COUNTRY CHRISTMAS, is set to open November 26 and construction has started this week on their much anticipated new rehearsal hall!

This new addition to the theatre will complete their cultural space and enable The Playhouse to rehearse their shows onsite. The theatre already builds their shows in its workshop facility and rehearses some of them at the theatre itself. But during the summer months they have traditionally used the former Masonic Hall at St. Lawrence & Fifth Sts as their rehearsal space. This summer they rehearsed in a room made available to them by Tom Morrow and the McIntosh Country‘ Inn and Conference Centre.

‘These have all been great spaces for us,’ remarked Artistic Director Donnie Bowes. ‘But having a dedicated rehearsal space onsite will allow us to produce our shows more efficiently and effectively with all departments under one roof.’ The Playhouse has renovated, built and improved many aspects of its space over the past several years having added a Box Office and Administrative wing on the West end of the building and a workshop at the East end. It has also undergone extensive renovations to continue to provide a comfortable and safe environment for its audience and also recently installed new state of the art seating. All of these previous renovations, improvements and additions were paid for by The Playhouse Box Office and Sponsorship revenues.

The cost of this current construction of a rehearsal hall, however, has been shared by Canadian Heritage Cultural Spaces Program with a grant of $97,000 which MP Guy Lauzon and North Dundas Mayor and past Warden Eric Duncan championed. In announcing the substantial contribution, Mr. Lauzon emphasized that it was an investment in a local organization that makes a significant contribution to the cultural and economic well-being of our community.

This summer’s announcement from the Morrisburg Leader

8 months of professional live theatre and concerts with something for EVERYONE and entertainment for ALL.

It’s hot off the press with all the information you need about our exciting new Season!

How Do You Want To Receive our Brochures? 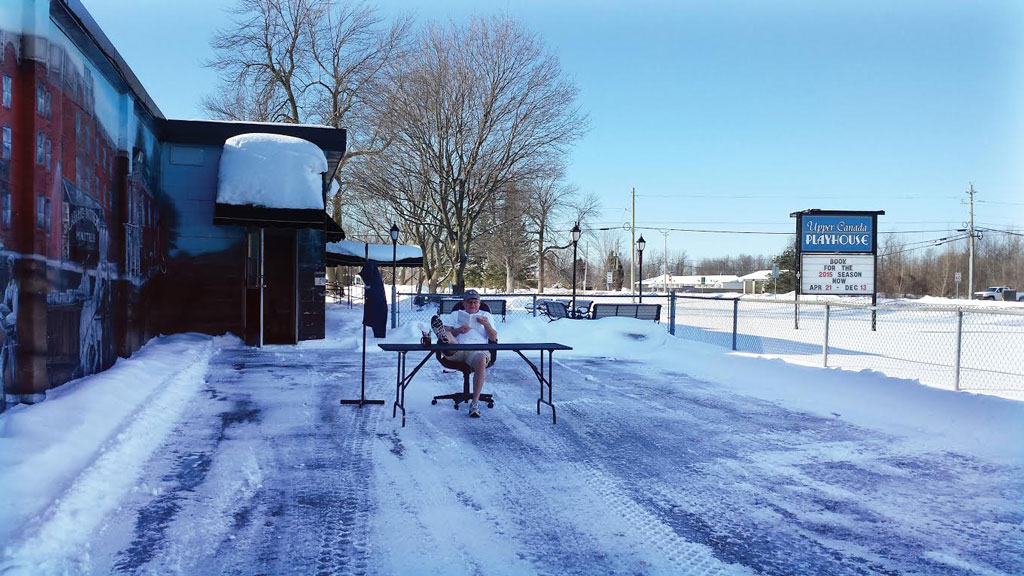 This shot was taken hastily. You can figure out why! We’re getting ready to add a new Rehearsal Hall to our theatre! It will enhance and complete our venue and make it easier for us to rehearse all of our shows onsite.

Watch for shots and info on the progress this Winter!

Artistic Director Donnie Bowes shows just where our Rehearsal Hall will be. He’s also taking advantage of the opportunity to tell you it will be air conditioned!